Benefits of using PowerShell with SharePoint 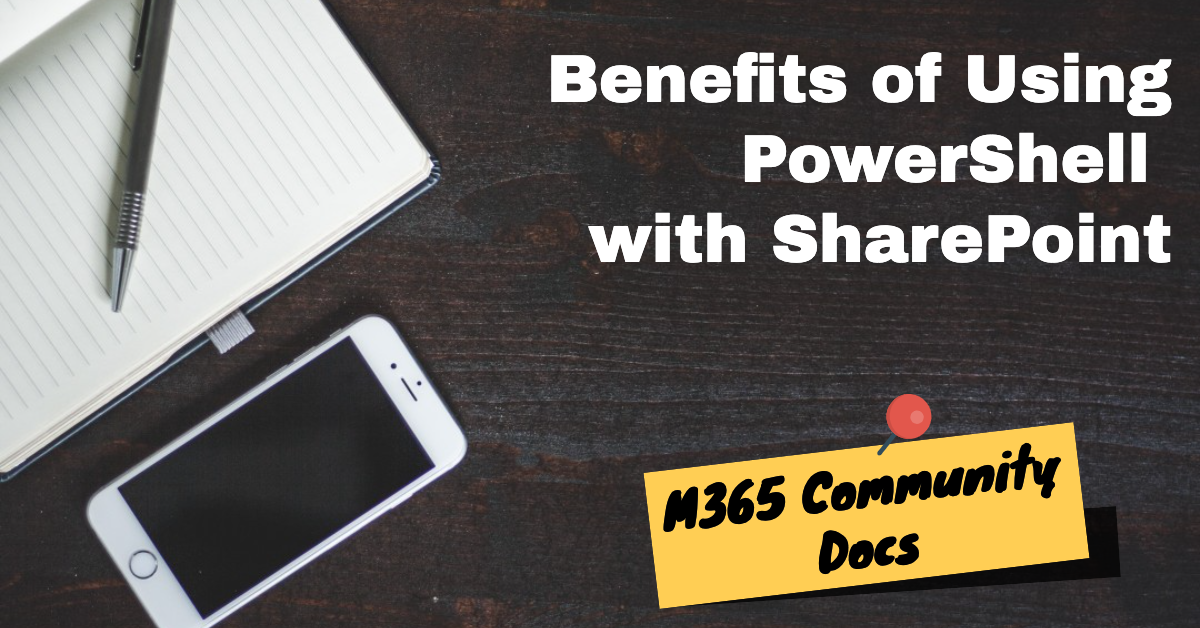 This is an article I have written for the Microsoft 365 Community Docs repository on Github. If you don’t know what this repository is about, I would highly encourage you to have a look at the README file. It contains information to guide you about the purpose of the repo, and also how to contribute!

The version that ships on Windows devices is called Windows PowerShell, and the cross-platform version is called PowerShell Core and is also available on Windows.

Let’s have a look at all the different modules currently available for SharePoint.

The Client-Side Object Model is more intended for developers, as they will use it to build applications by accessing many SharePoint functionalities. But it can be used by administrators when native PowerShell cmdlets don’t exist, or to create scripts.

Whenever we use PowerShell, we usually install the required module, and run Import-Module. However, with SharePoint on-premises, before you can access the cmdlets (except if you’re on the pre-loaded SharePoint Management Shell), you need to run Add-PSSnapin Microsoft.SharePoint.PowerShell. Not a big deal, but something to know.

There’s a lot of possibilities to manage your environment with the SharePoint on-premises cmdlets, as the module contains approximatively 840 cmdlets.

That’s a big drop from the on-premises version isn’t it? But when you think about it, it makes sense. With SharePoint Online, as you may know, there’s a lot Microsoft is taking care of, therefore there’s no need for us to manage databases, Service Applications, or even Web Applications as a few examples.

PnP PowerShell is a Community initiative/effort and is available on Github. It combines complex CSOM & Microsoft Graph cmdlets in the background, and gives us the look and feel of native PowerShell that we are familiar with. The module is expanding beyond SharePoint, to also serve Microsoft Teams, Power Automate, Microsoft 365 Groups, Planner, etc… and has 500+ commands.

Caution
Compared to its predecessor (now archived & not maintained anymore), the new PnP PowerShell is only supported for SharePoint Online.

Also part of the PowerShell PnP initiative is the CLI for Microsoft 365. This allows you to manage your Microsoft 365 tenant and SharePoint Framework projects on any platform.

No matter if you’re on Windows, macOS or Linux, using Bash, Cmder or PowerShell, using the CLI for Microsoft 365 you can configure Office 365, manage SharePoint Framework projects and build automation scripts.

So why should you use PowerShell?

As mentioned at the beginning, PowerShell is an automation scripting language. Therefore, most of the tasks that require many ‘clicks’ or are repetitive should be automated. PowerShell is used primarily for bulk actions, or complex automation tasks mixed with other files format like .csv, .json, or .XML, and will reduce most time consuming efforts in the long run.

Tip
If you need to create only one site collection, using PowerShell wouldn’t really be beneficial!

Imagine it’s Friday 4.00pm, you are just tasked to create 100 Site Collections, and you can’t be late for a very important appointment that day. Do you think you can achieve that manually, (very) quickly so you can leave early? 😰

Chances are… you’re going to miss your appointment.

If you use PowerShell, it’s likely to take less than 5 mins, and off you go!

Sure, you have other purposes for using PowerShell in SharePoint of course. Other than creating things, you can change/remove them all at once on multiple sites, extract information like Users/Groups/Permissions, and even integrate with other platforms like Azure to automate your most complex tasks!

More examples where PowerShell is used:

Who should know PowerShell?

This question might be a bit tricky for some.

PowerShell Development is also a known skill and usually coupled with other ones like C#, or SQL Server to only name a few.

Why is it so important?

Managing SharePoint on-premises or online effectively and efficiently is crucial. This also applies to other platforms like Active Directory, Microsoft Exchange, or Systems Administration.

If you live within the Microsoft ecosystem on a daily basis, you will likely use PowerShell at some point.

You don’t need to be called a ‘developer’ to run a few cmdlets or create scripts.

Note
Updated on 07-Nov-2021
PowerShell, SharePoint, Community
Back | Home
Should I Store My Files in Microsoft Teams or SharePoint? An Understanding of Behind The Scenes